10% off sitewide! Use code BUMBLEPLANTS_10 at checkout.
FREE mystery cutting with every purchase!
FREE Priority Shipping on all orders over $100

Top 8 Rarest Succulents in the World

Pelecyphora aselliformis is a super rare cactus that resembles the look of a Sowbug or Woodlouse (Oniscus asellus). It grows very slowly and thrives in well draining soil in a humid and sunny dessert environment. Some people might also know this cactus as the Peyotillo, woodlouse cactus or hatchet cactus.

Agave victoriae-reginae 'Albomarginata' are extremely rare succulents also known as the White Rhino Agave. It's a slow growing plant with rosettes growing like a bursting star from the middle of the bud. Native to Mexico, the white rhino agave can grow up to 2 ft wide with 10 - 12 inches bands.

Lithops are small and unusual succulents that look out of this world. Native of South Africa, lithops are also known as “living stones” and rarely grow over one inch. It’s near stemless and most of the plant grows underground in hot dessert-like environment. Lithops blends well with its environment by developing camouflaging colors to stones and plants around it. Resembling an animal’s foot or hoof, lithops can bloom in the fall, either yellow or white flowers from the middle of the plant. 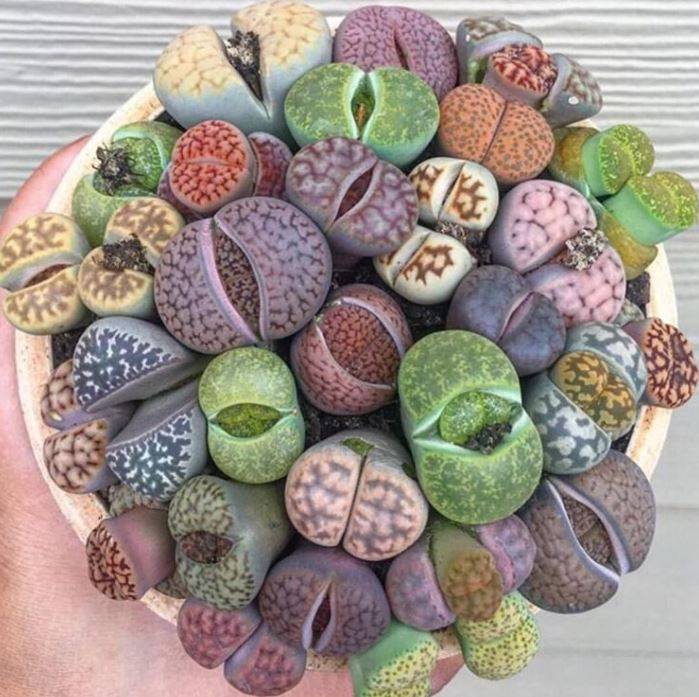 Aloe Polyphylla or Spiral Aloe is an interested and rare succulent. It is perfectly spiral and its leaves stay compactly clockwise or counter-clockwise. Don’t be fooled by this succulent because it can grow up to 2ft wide. It requires very low maintenance and can tolerate high drought conditions. Its sharp thorny leaves are deer resistant but the succulent attracts birds and bees.

Stapelia desmetiana is a stemless and hairy textured succulent. It's not as pretty as it looks as it generates a foul odor resembling rotting flesh when they bloom. This weird succulent uses the smell to attract pollinators such as blow flies that often lay eggs around the coronae of the Stapelia flowers.

The Merrmaid Tal succulent looks exactly like how you imagined it - a fin-like looking tail floating underwater. This cactus and succulent mix goes towards where the sunlight is and can reach 1 - 2 feet high and 3 - 5 feet wide. The intriguing fact about this succulent is that although it's native to South Africa, it grows in the winter time and goes dormant in the summer. Crested Senecio Vitalis is very easy to take care of and requires a low maintenance. Just make sure it has enough sunlight and water when the soil is completely dried out.