How to Get Rid of Gnats
From Plants FOREVER

Short Answer:  You can easily get rid of gnats by watering with mosquito bits to kill the larvae and eggs inside of the soil. While that is working, put yellow sticky traps to catch adult gnats so they cannot breed further.

How do I get rid of gnats?

There are a few ways of getting rid of gnats. I know you might say I HAVE TRIED EVERYTHING AND NOTHING WORKS. Believe me, I’ve been there and it’s a cycle that you have to keep doing until you kill them all. Here are some methods to get rid of gnats FAST:

Gnats love landing on soil that are moist to lay their eggs. If your top soil is constantly moist, that might mean that you are overwatering your house plants. Try waiting 10 - 12 days before watering so that the top layer of your soil is dried out. Without an optimal moist environment, gnats will not lay eggs and gnat larvae will die.

If you continuously see gnats flying around your plants, it’s most likely that the soil in your plants are infested with gnat eggs. One very effective way is to water with soaked mosquito bits for 2 - 3 weeks. Mosquito bits have Bacillus thuringiensis var. Israelensis (BTI) which is a bacteria useful for killing gnat larvae. The night before watering day, soak the bits for 12 hours. Do not overwater your plants which is the number 1 cause for gnats to thrive. Alternatively, you can also sprinkle the bits into the soil for slow release. Continue watering with mosquito gnats until you stop seeing gnats!

Gnats hate cinnamon. Since gnats lay eggs on the surface of soil, sprinkle a thin layer of cinnamon on your soil. This will stop gnats from landing on the soil. It will also prevent larvae from escaping the soil when they hatch, hence killing them.

The most immediate short term solution to reducing the amount of annoying flying gnats is to use yellow sticky traps. Plant the sticky traps NEAR a light source around your plants. I also find placing the sticky part ON your planter pots facing downwards works very well.

I was able to trap small gnats that tried to fly out of the planter pots upwards. Since gnats like hanging out in the soil, why not create a sticky ceiling so they can trapped when trying to fly out? Try it, it works.

What are fungus gnats? (Understanding your enemy)

Fungus gnats are tiny flying pests that like to feed on decaying matters in soil and dirt. They are less than ⅛-1/4 inch long and have very long legs compared to the overall size of their body. Most the fungus gnat species are black in color and have a long, slender abdomen.

Fungus gnats have long legs and filmsy wings. They are as small as sand but you will definitely notice it when they fly in front of you. For some reason, gnats love to fly extremely close to human face, clothes and sometimes into your eyes and nose, so beware!

How do you pronounce gnats?

Nat (the G is silent)

Why do I have gnats in my house?

Gnats in the house can originate from infested houseplants or damp soil brought into your home. Once the soil is infected with gnat eggs, hundreds of new baby gnats hatch and fly around the house. Gnat are also attracted to unsealed produce or fruits, fresh flowers, stagnant dirty water and moist garbage. 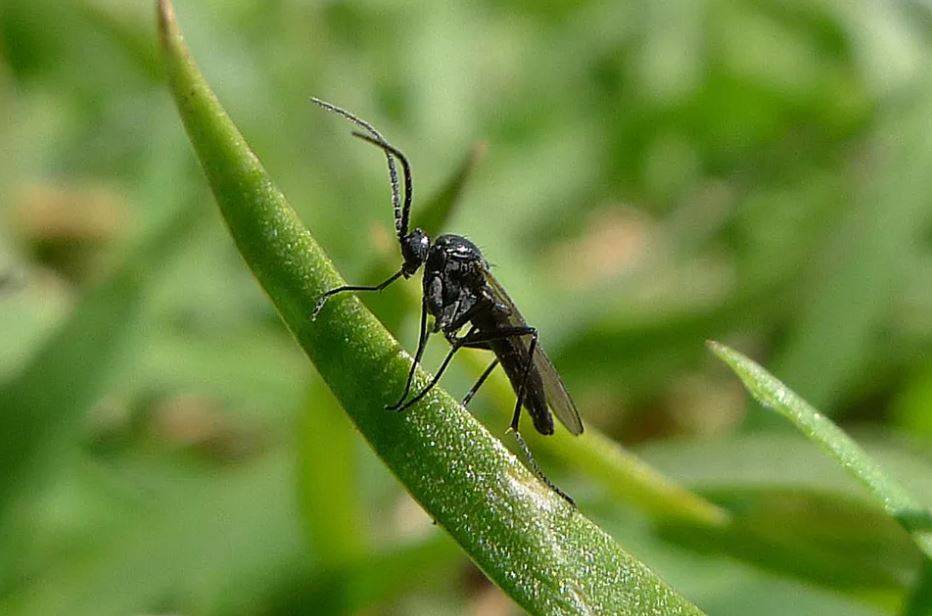 How long do gnats live and how fast do gnats reproduce?

Gnats can live up to four weeks but once you have gnats in your house, you need to act fast because they reproduce very rapidly. A female gnat can lay up to 100 - 300 eggs each time, up to 30 times before dying in 7 - 10 days. You do the math!

How long do gnats live and how fast do gnats reproduce?

Gnats can live up to four weeks but once you have gnats in your house, you need to act fast because they reproduce very rapidly. A female gnat can lay up to 100 - 300 eggs each time, up to 30 times before dying in 7 - 10 days. You do the math!

Generally, gnats are just an annoyance to humans and plants because they are small and have no directional sense. Sometimes, they try to kamikaze and fly directly into my eyes and slam into my face. However, the female of one species of gnats called the sand flies bite humans. The bites cause tiny, red bumps that are itchy.

What smell do gnats hate?

Gnats absolutely hate the smell of vanilla, lemon and lavender. These three scents can be used as natural DIY gnat repellent at home. You can also light up candles in your home with these scent to keep gnats away.

Do Gnats Die in the Winter?

Gnats cannot survive in cold temperature and thrive in environment between 70 - 80 degrees Fahrenheit. However, if you have your plants inside during the winter time, you might want to resort to the above methods to kill gnats since the temperature inside your home might not be low enough to get rid of gnats.